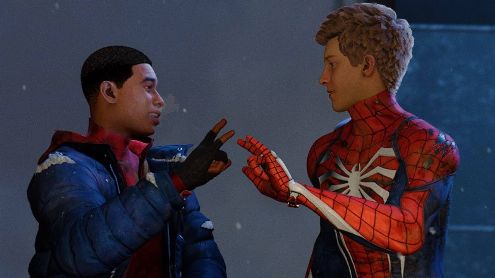 Marvel’s Spider-Man is among the best-selling PlayStation First Party exclusives in the brand’s history. Marvel’s Spider-Man: Miles Morales, its standalone expansion is multimillionaire. If we add to the immense popularity of Spider-Man with the general public, everything suggests that Sony is not done with the world of spider-man. And a recent clue that appeared online suggests that this is indeed not the case.

The speculation for the day was prompted by comedian Nadji Jeter’s Instagram account. The latter, who lent his voice and his gestures to Miles Morales in Marvel‘s Spider-Man and Marvel’s Spider-Man: Miles Morales, he posted a photo of him in the middle of a motion capture session last Tuesday without specifying the content of the project.

Unsurprisingly, the young actor quickly deleted this post when the latter started to make noise. Indeed, fans of Insomniac Games immediately began to wonder if this motion capture session was linked to a new Marvel’s Spider-Man. Since nothing is ever really deleted on the Internet, the photo (shared on Twitter by Erfan Manavi) is available in our gallery below.

Insomniac Games has said in the past that the story of its version of Peter Parker is not over. And more recently, job offers posted by the Californian studio revealed that the latter was playing a multiplayer game..

Should we deduce that there are possibilities of the next Marvel’s Spider-Man will allow several players to simultaneously embody Peter Parker and Miles Morales (and possibly other heroes)? Impossible to say categorically. In any case, this is a possibility which cannot be considered at the present time. Case to follow as the other would say.

Do you think Insomniac Games beats iron while it’s hot and is already preparing its third Spider-Man? Do you think this next game will feature Peter Parker? Miles Morales? Both ? Tell us all in the comments below.