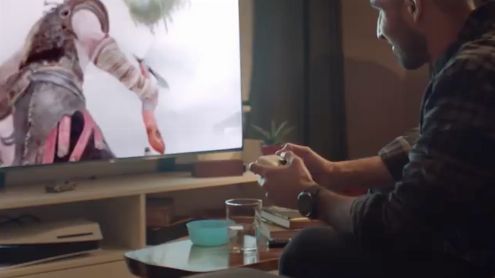 Last December, Hermen Hulst, the president of Sony Worldwide Studios, had caused a lot of talk and generated a certain hilarity by posting a photo on his Twitter account in which it was possible to see that his PS5 was lying upside down in his cabinet. Obviously, this little blunder did not motivate Sony to pay more attention to the images of its new console that it broadcasts.

The unusual news of the day is brought to you by Sony. Indeed, on his official Twitter account, the electronics glove a post today a new advertisement. In the latter, it is possible to see a father telling a story to his son to help him fall asleep. This story was inspired by his games of God of War (PS4) on PS5. So far, nothing abnormal.

If this video calls out, it’s because when it shows the father playing his console, the latter is placed … upside down. Obviously, the thing made laugh and did not fail to speak on Twitter. And unsurprisingly, Sony quickly deleted his tweet. A brand that does not use its own devices properly, has made a bad impression as the other would say.

Move around, there’s nothing to see!

As we had envisioned such an unfolding of things, we saved the video and we propose to watch it until you thirsty above. As a reminder, when Hermen Hulst posted a photo of his PS5 posing upside down on his Twitter account, the tweet was quickly deleted by the main interested. And when the photo reappeared, the area showing the PS5 had “oddly” not been cut off.

It is in any case surprising to see that Sony does not control more closely the images of its console that it broadcasts. Especially since the experience of gaming made in Sony is at the heart of the advertising in question today. Perhaps the reason for this blunder lies in the fact that it was an advertisement carried out on behalf of Sony and not of the PlayStation division directly. Anyway, the thing is not very serious. It will just make a good anecdote told.

What do you think of this blunder? Do you think Sony should bounce off it and have fun with it? Or pretend she never existed? How do you think such a thing can happen in a company of Sony’s stature? Give us your opinion in the comments below.