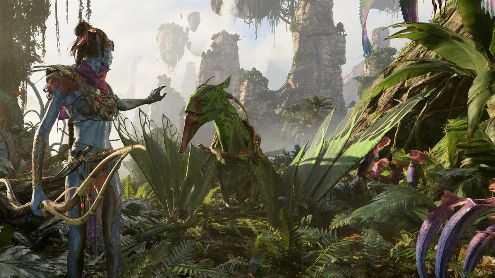 If she questioned the real craze around a somewhat forgotten film license for 10 years, the latest announcement from Ubisoft Forward certainly did not hurt our eyes. The rendering of Avatar Frontiers of Pandora is at the heart of a video released recently.

Exclusive to new generation media and to the PC, Avatar Frontiers of Pandora will run on the Snowdrop Engine, used for The Division, The Division 2 or even Starlink and which will be used for the project. Star Wars by Massive Entertainment. Because the world of Pandora imagined by James cameron and created by talented special effects studios turns out to be as beautiful as it is complex and dense, this engine had to be upgraded. What the developers tell us in this short video clip above.

In order for this first-person open-world adventure game to recreate all the splendor and all the details of the Na’vi exolune, the programmers had to whip. If we are to believe the speakers, Snowdrop has taken a step forward and now allows many more elements to be included on the screen, taking advantage of complex shaders and plausibly reacting to interactions provoked by the player. Not to mention the new volumetric system for cloud management and Ray-Tracing, which should make it possible to forget the already signed Ubi experiences based on the first film. Ah bah, that was already the case. Perfect. All you have to do is wait to see a little more and, for the most suspicious, make sure there is no downgrade under rock.