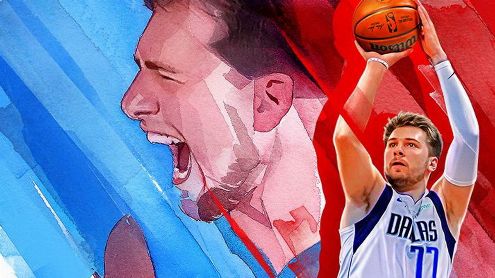 Virtual sport is not complicated. Every year or almost, the most popular disciplines are renewed. Basketball is no exception. And like FIFA 22 a few days ago, the successor to NBA 2K21 first communicates on what will attract the barge: the stars.

NBA 2K22 will be available on September 10 on PS5, Xbox Series X | S, PC, PS4, Xbox One and Nintendo Switch. 2K has chosen our national holiday to make this announcement which, while not yet accompanied by gameplay images and videos from the game from Visual Concepts, formalized the opening of pre-orders based on new promises and mostly stars of the orange balloon on the cover.

To start creating envy, the game editor relies first on known figures. Dallas Mavericks Slovenian Luka Dončić will cover the Standard Edition, while the 75th anniversary edition of the NBA will feature Dirk Nowitski, Kevin Durant and Kareem Abdul-Jabbar, all three painted by artist Charly Palmer. You can find the visuals in our gallery below. Note that the United States benefits from another exclusive version called WNBA 25th Anniversary Edition, which highlights a basketball player, Candace Parker, number 3 of the Chicago Sky.

You will understand, the offer will be multiple. Here is the detail of each edition, which confirms that if you change generation during the season, there will be a small supplement:

For the Cross-Gen edition:

For the 75th Anniversary editions:

And regarding the game itself, although “the best-selling and rated NBA series of the past 20 years” has seldom been due, it seems to be secondary, with the various videos uncovered above lingering once again. on athletes. We will therefore keep a close eye on the moment when it becomes serious.