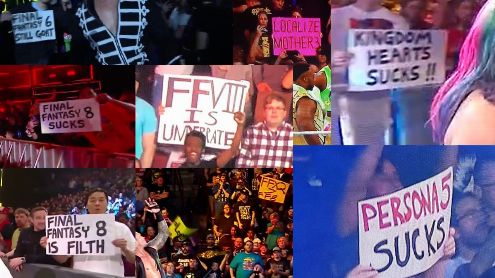 If there is one thing that gamers do not fear, it is taking part in endless debates during which each participant seeks impose make others understand how right he is. And while these debates are usually found under article comments, on forums, or on social media, some JRPG fans have found an original way to “chat.”

For several decades now, wrestling fans have gotten into the habit of going to shows with homemade signs on which they write all kinds of things: personal messages, messages of support for their favorite wrestler, even the Internet, etc. Obviously, the goal for them is to find themselves in front of the camera and therefore to show their “work.”

As reported by the American site Kotaku, some wrestling fans are using this opportunity to pass the screen to send messages about their likes in JRPGs. It all apparently started over three years ago when a wrestling fan appeared on screen with a sign that read “Final Fantasy VIII is under. “

Over time and missions, other fans of this sports entertainment have responded to this claim with other comments of their own. While the debates mainly concern the Final Fantasy series, other games have been incorporated into the “conversation.” Some examples of signs seen in WWE or AEW missions in recent years:

-Final Fantasy 6 is still the best ever

-Final Fantasy 8 is a waste

As you can see, these discussions do not go into detail for lack of space. But the thing has grown sufficiently large to be underlined.

Pandemic COVID-19 requires, the majority of TV wrestling shows took place without an audience for more than a year. Now that spectators are beginning to be able to witness the missions of the main American leagues again, the “RPG war” will be able to resume with a vengeance.

And since this good-natured rivalry has been mediated, it’s a safe bet that the number of signs of this type will increase. when the signs on the likes of football fans in terms of video games in the stands of Ligue 1?

What do you say in this indefinite way of discussing? Do you think it will spread to other sports? What do you think of Final Fantasy VIII? Tell us all in the comments below.