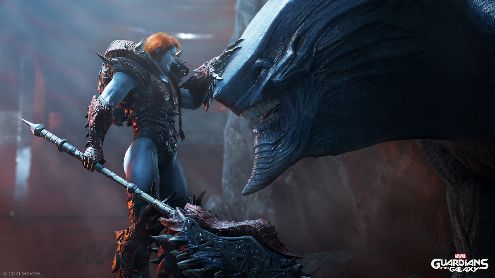 Eidos-Montreal’s Director of Cinematics and Animation shares a glimpse of one of the game’s biggest characters in a new Marvel’s Guardians of the Galaxy cinematic.

At the start of the evening, Eidos-Montral has unveiled a new gameplay cinematic, following the global announcement of Marvel’s Guardians of the Galaxy the occasion of E3 last June. In this cinematic, “Star-Lord and the Guardians hatch a plan to negotiate with Lady Hellbender, chief of Dark, queen of Seknarf-9 and collector of monsters “.

According to the official statement, the explanation of the cinematic is as follows: “While the player must decide which ‘rare monster’ to sell, that is to say Groot or Rocket, this memorable moment sets off a series of events which will propel this bunch of misfits on a winding ledge across the galaxy in an attempt to save the universe. “

We have as a bonus the comments of Darryl Purdy, who is none other than the director of cinematics and animations at Eidos-Montral, what better to understand what it is all about … Suddenly, always according to the CP it appears “that it quickly becomes obvious that all is not as it appears, and Lady Hellbender may not be the monster hunter described to the Guardians. ” I take note of that.

Lady Hellbender is a recent Marvel character much loved by fans, and we wanted to make sure her place in our universe of the Guardians accurately reflects her complex personality, depth and nature that fans expect to find. And since we instill humor in every aspect of our game, a gave us the opportunity to counter expectations and introduce an unexpected dynamic between her and a certain Destroyer.