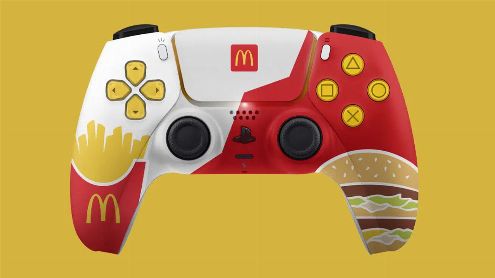 Offering custom controllers has over time become a frequent promotional practice among console manufacturers and their partners. But for things to go well, the two camps still need to be aware of and validate the process.

Read also: The DualSense opens its haptic features a second game on PC

A few days ago, McDonald’s Australia made the buzz on social networks for a reason that has absolutely nothing to do with its menus or the Happy Meal toy of the moment. Indeed, the Australian subsidiary of Ronald McDonald’s firm has announced that as part of its 50th anniversary, it will organize a “stream week“in partnership with streamers from the land of kangaroos. And that during the latter, these same streamers would win 50 DualSense controllers for their viewers. So far, nothing extraordinary.

Where the thing made speak well beyond the Australian borders, it is because these controllers PS5 were far from being normal. to believe the visual distributed by McDonald’s Australia, available in our gallery below, these DualSense would have been in the colors of McDonald’s and some of its most famous products (fries and Big Mac). Why would “have”? Just because Sony cut this promotional operation short.

Better to ask for forgiveness than permission?

If you are wondering “why,” well the reason is as simple as it is surprising given that we are talking about a company the size of McDonald’s. Indeed, the group at the yellow M simply “forgot” to request authorization from Sony Interactive Entertainment before setting up and launching this operation. The fast food glove therefore had to stop its campaign and publicly announce that Sony did not want anything to do with it:

Sony PlayStation has not permitted the use of its controller in any promotional material associated with the proposed Stream Week event and we apologize for the inconvenience. McDonald’s Stream Week has been postponed and Sony PlayStation controllers will not be part of the contest. If you forgive us the expression, here it is that the hell does. Especially since it’s not as if McDonald’s didn’t have jurists and lawyers at its disposal to properly set up this kind of thing …

The question that now arises is the possible existence of these McDonald’s DualSense. If McDonald’s Australia has had them produced and some of them are found in the wild, chances are they will sell for gold.

What do you think of this situation? Does she surprise you from McDonald’s? Do you understand Sony’s decision to separate itself from the operation? Would you like to have a DualSense McDo? Tell us all in the comments below.