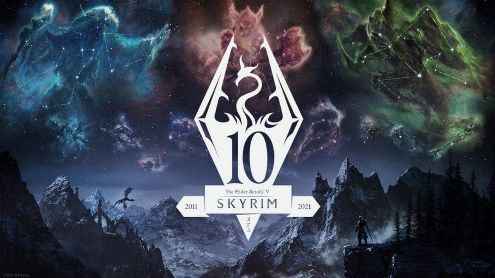 We are having a lot of fun with the longevity of GTA V and its next release on next-generation consoles. But that would be to forget the “padre of recycling game”, the one who with his Special Edition has managed to be ported to Alexa. soon 10 years old, he still hasn’t finished.

The Elder Scrolls V Skyrim Anniversary Edition is scheduled for release November 11 on PC, PS4 and Xbox One. A PS5 and Xbox Series X | S update will be available on the same day. Announced as part of QuakeCon 2021, this new edition presented as ultra-final is part of a program celebrating the 10 years, this exact date, of the cult RPG of Bethesda. The content of the community will be widely highlighted:

We’re also excited to announce the most definitive version of Skyrim yet: The Elder Scrolls V: Skyrim Anniversary Edition. In addition to the three free Creation Club items mentioned above, This version contains the full game plus all three expansions and over 500 unique Creation Club content items, including pre-existing and new quests, dungeons, bosses, weapons, spells and more. !

Existing The Elder Scrolls V: Skyrim Special Edition owners and Xbox Game Pass members will also have the option to purchase an Anniversary Edition upgrade for their Special Edition version of the game in order to access all of the additional content found in the anniversary edition.

In addition to all this, Bethesda invites those most involved to submit their commemorative artwork and cosplays to then be integrated into the Skyrim Museum. And above all, a concert will be held at the Alexandra Palace Theater. The performance will be performed by the London Symphony Orchestra and the London Voices Choir on November 11 at 8:00 p.m. French time and broadcast on YouTube and Twitch.