In Stockholm, there are two bridges, Västerbron and Tranebergsbron, both of which are awful to cycle in. It is really steep and no matter which road you come from, it always seems as if you have a headwind. There are two bridges that have made many cyclists park their bikes for good and dust off the car.

Tripper HS H-9 is an absolutely excellent electric bike at a very good price. All components are of a high class and the engine shoots properly on the uphill slopes or when there is a headwind. This is a very affordable bike that is also fun to ride.

When sitting on a Tripper HS H-9, these bridges offer as much resistance as butter provides a hot knife. With its rear-mounted engine, one location generally provides more thrust, speeding up any bridge or uphill slope. This is a bike for you who like to sit leaning forward and rushing forward in traffic.

The engine, which bears Ecoride’s name, is called the Ecoride Drive System R5. Whether it is made by Ecoride or “just” an OEM engine that they named, is of less importance. It makes the Tripper HS H-9 not only feel lively but is alert. As with previous electric bikes we tested, the assistance ceases when the bike has reached 25 km / h. But you reach that speed quickly when the red light turns green.

Also read: 6 stylish bicycle helmets that protect you on the bike ride

The frame is large and the bike is as stable as a thousand. The wheels, 28-inch, are shod with solid rinds that catch any unevenness in the road. However, it lacks a damped front fork, but given the price – more on that later – we are tolerant of this.

Tripper HS H-9 has nine gears, Tripper HS M-10 that we tested recently has ten. The difference is negligible. However, the chain jumps just as fast and precisely in the Shimano Alivio gears as in the more expensive model when you shift up or down. The disc brakes, also from Shimano, stop the bike in a calm and controlled way.

On the handlebars is a screen where you can see how much battery is left, your speed, distance you have felled, what assistance you use (there are four levels) and more. What sets it apart is that it is in color and equipped with nfc. To be able to start the bike or remove the battery, you must flip the screen with a washer to unlock it. Smart thought and ditto function!

An even smoother function is a small lever located under the screen. Hold it when you are going to lead the bike and you get a little help from the engine. “Lead a bike, it’s not hard” I hear a chorus of voices shout in unison. True, a regular bike is a baggie to lead. An electric bike often weighs much more and then it is nice to get help. This is a feature found on many bikes, but which requires you to hold down buttons and more to activate it. Here it’s rude.

Up to eighty miles

The battery, located behind the seatpost, does not have the same range as the HS M-10, but it lasts up to 80 km depending on the assistance level, wind and how many uphills you have to defeat. But the figure agrees well with our measurements.

And then it’s time to mention the price. This bike costs SEK 20,000. Then you get a whole lot of high quality bikes for the money. It is stable, fast, with an engine that responds well to your pedaling, it is possible to attach a box to it and it is really affordable! 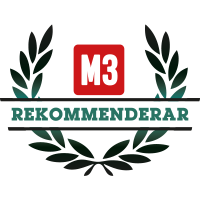 This bike is the opposite of the Lifebike C-Mute Uni G8 glider bike. Tripper HS H-9 is a bike for you who like to lean forward and re-ride all other cyclists. But the opposite only concerns which cyclist it is for, because when it comes to price value, cycling joy and price, it is just as good! Should we whine about something, it’s the saddle, it’s not the most comfortable we’ve come across.

We give this without a doubt 4.5 out of 5 in ratings and a resounding recommend-logo!